Service Learning: Get out the vote

For our ITU, we have decided to focus our service learning component on voter turnout drives. Because of the politically contentious nature of the broader unit, we wanted to find something that would be uncontroversial while still centered on a major political issue. Voter turnout is, by and large, a nonpartisan topic, so we decided the service learning portion of our ITU would be for students to get involved in increasing voter turnout. This will also segue nicely into the broader unit, as students will be more able to identify with voters when they move into the campaign portion of the unit. 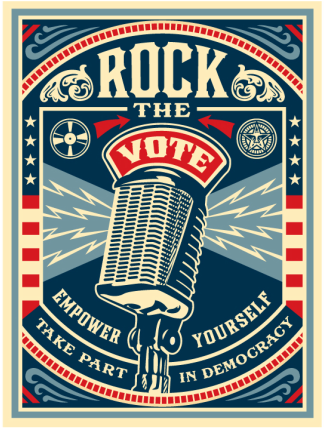 Day 1: Students will investigate potential historical and contemporary causes of low voter turnout, analyze the numerical data regarding voter turnout and any correlation between turnout and election results.


Day 2-3:The class will communicate with local government (ideally the office of the Registrar of Voters) and nonprofits and collaboratively develop (or devise a way to contribute to an existing) "get out the vote" campaign encouraging their local community to register to vote.

Homework for this weekend: Enact this campaign in the local community, working together to encourage active voter participation in the community.

Day 4-5: Students write about what they learned and how they would improve their efforts next time. Each group will then incorporate this experience into their campaigns, creating a PSA or other media example that ties into their campaign's goals. Each assignment will be graded as it is completed and then included in the cumulative Campaign Trail Diary assessment.

This assignment is a hybrid of several styles of service learning; first, the initial investigation calls for students to research several topics relating to voter turnout, then has them participate in both the strategy and direct portions of a voter turnout drive. The core belief of this activity, however, is the advocacy piece of working to inform the community about the importance of voting and attempting to help advance the cause. This is a very pressing issue, as only 58% of eligible citizens voted in the last presidential election, with those numbers dropping far further in "lower stakes" elections during others. By educating students on the history of American election turnout and the consequences of lower turnout, educational topics in keeping with the California Core Standards, education and service are tightly interwoven.

This activity also has students collaborate, both with each other and with outside agencies, to create this drive. It contributes to a reciprocal relationship, as students' encouraging their community to vote can lead to the voices of the people around them being heard. They can also learn that, for all the value one vote has, convincing large groups of people to vote can be even more powerful. Having them reflect on their experience can help them empathize with the people who work full time in these causes, as well as making them more aware of the reasons and struggles people face that lead to low voter turnout. Participation in our democratic society is, from some perspectives, the ultimate civic responsibility.
Powered by